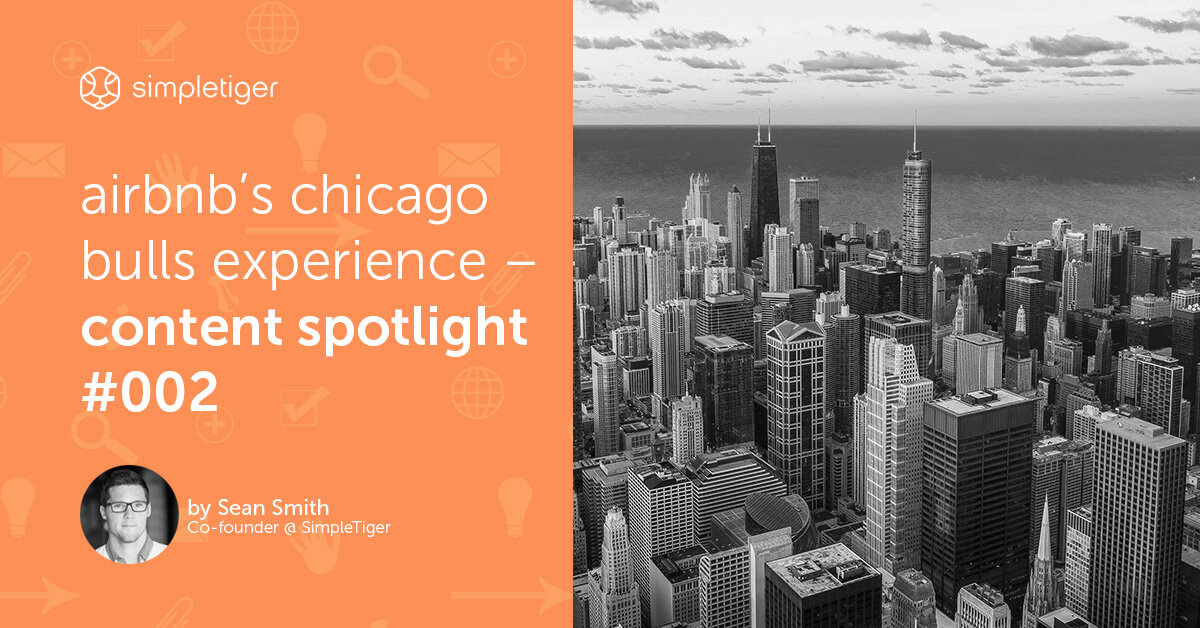 This is going to be the first of a new daily segment (Monday – Friday) called the "Content Spotlight" where we examine a single piece of content from a single company that we came across that day and fell in love with. This could be a clever blog post, a promotion that is just right for a niche, or just a well placed call to action.

Basically AirBnB is hosting Scottie Pippen's room at the United Center for a winner to stay in – promoting their own platform's power of hosting any room, anywhere in the world, with any specialties that come with them.

You can see the full details on their page, but here's just a bit of the description:

We’ve teamed up with Airbnb to transform our home into yours, just for one night. On April 11th, 2015, you can stay at the home of the Chicago Bulls at the United Center. We’ve transformed a luxury executive suite into a luxurious Bulls themed bedroom, complete with glorious floor-to-ceiling homecourt views. Following a full afternoon of behind-the-scenes tours and VIP seat for the game against Philly, you’ll have the chance to play b-ball with your host, Hall of Famer and six-time champion, Scottie Pippen.

This is a killer piece of content, for all the right reasons.

What makes it so special?

This is where we break down why it was so special, graded by three sections; creativity, execution, and exposure.

Not only did they take a huge market (Chicago) and find the absolute heart of it to bring exposure to their brand, and boost the potential interest of every other AirBnB listing in Chicago – they did it in style. They made it just a simple post on their own platform, no dedicated landing page, no mini-site, it's just part of their offering, which makes it feel like every single other page on their site is as extravagant as this one. They aren't, but they sure as hell feel that way now.

This is somewhat easy for AirBnB to organize, because most of the leg-work falls on the Chicago Bulls organization, and the organizer, Scottie Pippen. By getting Scottie Pippen to host this you not only get the excitement of spending time with a walking sports legend, but also all the exposure that comes with that. Had they just said "Can we host that room for a night?" That would have been one thing, but that they took it the extra mile and got buy-in from one of the team's all-time greats to do a large part in their own promotion – they made it easier on themselves and far more effective than it ever otherwise would have been.

After just a couple of days of this being up the page already has over 123,000 Facebook Shares and 33,136 Likes. It's also been linked by NBA.com (a massive domain I bet AirBnB didn't have links from beforehand) and the Chicago Tribune (a very Chicago, local, niche publication that will undoubtably help other Chicago listings rank from an organic perspective). I would say this alone would make the entire thing worth it, but who knows how many new AirBnB signups they've had just so people can sign up to win this experience – and how many new articles will come out linking to the page in reference and awe.