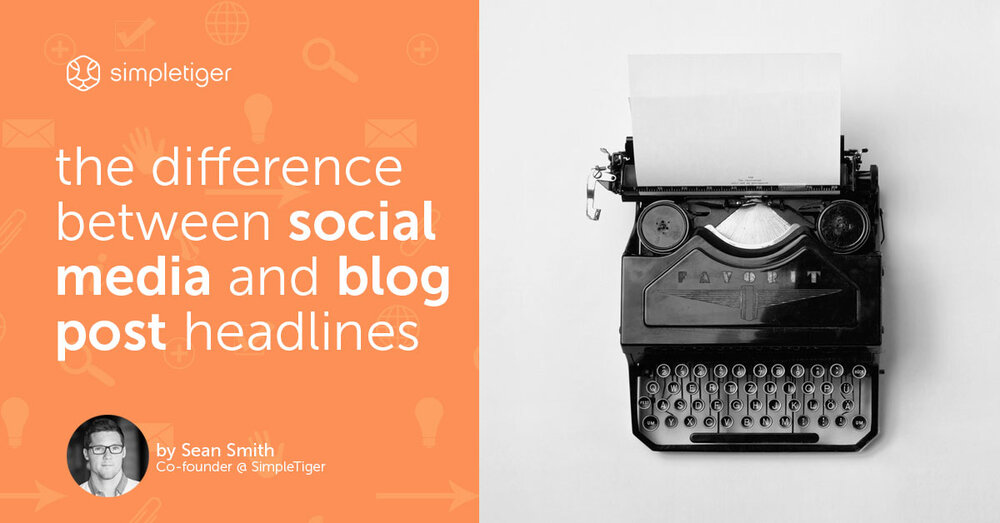 If you're writing a headline, you need to adapt yourself to the context of the platform.

The most important context you need to consider is if it's a social media headline, meaning a simple status or update that links to the page, or if it's the title of the page or article itself.

I see this being messed up so much in content marketing, even on very successful blogs that it becomes cringe-inducing. This is my attempt to write a very small, simple, quick guide to laying out the why's, the what's, the where's and the when's of a headline.

This is an example of a good blog post title:

A headline in a social media post should simply entice a reader while also funneling them to the promise given in the blog post title. This is your chance to get creative, not worrying about keyword relevance, and can give you the opportunity to go outside the realm of a normal headline that would be in a blog post and focus more on leveling deeply with your audience.

Copyblogger does a fantastic job at leading in to their blog posts and promoting them with social media, just take a look at their Google+ page as an example:

Yes, they do re-state the exact same title, but these guys have a reason to because their headlines are right on, and in Google+ specifically if you put *asterisks around your title* it bolds the title and Google+ will treat that as the title of the article when they show it in their SERPs. The point you should really pay attention to is the lead in after that title, but even the title in itself is perfectly catering to the medium at which they are posting. It behooves Copyblogger to post these types of titles on Google+ because it increases the chance it will be indexed and viewed further in the future.

If we look at a tweet that Copyblogger has published to promote a post, it is also catered perfectly to the medium, looping in the person who was the main reference in the post, anyone who is familiar with Sonia from Copyblogger will be immediately enticed to click.

My honest guess is that because Sonia's name is so well known in the industry, they were capitalizing on people searching her name specifically, which is why the focus of the headline is around her name. You might think it's just because it's about an article about her, but the article is about her to capitalize on the volume of searches for her. This is pre-meditated, not post-adapted.

The key is to think about:

A headline on a blog post will show on Facebook, LinkedIn and Google+ when you input the link, so you have free reign to write a more compelling lead-in to the article. On Google+ you will want to put *asterisks* around your title before going in to your lead so it can be indexed in the SERPs. On Twitter you will simply see a link, so it is usually best to write the same title, but use their unique markup where necessary, like @mentions or #hashtags to target certain communities.

The headline of your blog post itself should be focused on how it can inform people and set a promise for the content it contains, and how best it can rank for the keywords it relates to in Google.

Those are the keys, if you'd like some more in-depth conversation around writing headlines, please check out my list of lessons on Gibbon, and read this extremely extensive Buffer post on super effective headlines.