How The #Hashtag Killed Itself (And How To Use Them Now) 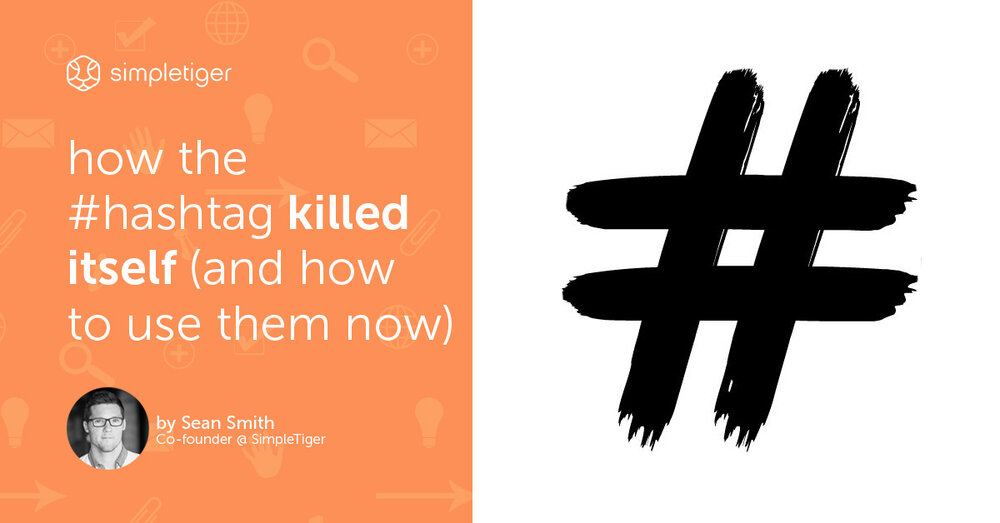 Hashtags are ubiquitous, and that's probably why their usefulness is nearly dead.

I say dead, not because you can't use them anymore, but because people don't want to use them for what they were designed for: to organize conversation.

People do want to use them, but only to call out emotional states, and for emphasis in lieu of other formatting options.

Using a hashtag for what it was originally meant for on social media has been made synonymous with over-promoting.

In-fact there is an entire meme toiling the fact that we try to over-tag every single activity we do:

This is a huge bummer because they are actually exceptionally useful.

Now hashtags are only used (from an organizational standpoint) for trends and events.

Meaning if I were to write a post about content marketing that was extremely insightful, and tweet it with #contentmarketing at the end of it, people would probably look away repulsed by the idea that I used a hashtag to try to sort my conversation to those that might be searching for that keyword, and in so doing that I am over-promoting.

They see marketing and they look away.

What Hashtags Have Become

Now on the other side of things, if I were at a conference and wanted to tweet an insight, I might be able to get away with using a #SXSW, #WWDC, or #io15 – to give people context of where the information or opinion is coming from or is targeted at. This would be fine, this happens all the time.

Luckily Twitter understands this limited use and has taken their technology to a level to understand the context of someone's tweets, the topic matter at hand, and to sort by that when you search. Now when you search a topic you get related hashtags, and sorted discussion directly from the text of tweets – basically what hashtags were supposed to solve.

Hashtags have simply become the punchline to a post.

The hashtag which was once used to sort discussion is now used as a sarcastic after-thought. The organization of discussions is limited to "discussions" that wouldn't really exist at all had they not been sarcastically invented.

Take The Rock for example:

Who the hell would be searching for discussion about "TheyReinvent" or "LegendsDontRetire" – no one, they wouldn't be.

The Rock knows this, it's not like he's trying to acquire the "TheyReinvent" market of Instagram. It's more of a punch-line use-case than anything. It's a replacement for bold text or italics. It's the bit that stands out at the end of a sentence, it just so happens to be a link that leads to other information of a similar sort of discussion.

The hashtag that does stand out as useful here, however, is #BALLERS – which is in fact a new TV show on HBO.

People searching for information around BALLERS might actually come across this Instagram post from Dwayne, and may be able to gain some personal value from this content. This is the topical use it was meant for, but is rarely actually used for.

How Hashtags Are Still Hanging On – And Being Useful

Now, that's the larger social web. What about in other applications?

This is where the hashtag is having its renaissance.

Apps like Slack are using hashtags to sort discussions between teams in closed networks, where a ton of discussion can be easily sorted and searched by topic using their respective hashtags.

This is beautiful, this is what hashtags were intended for.

The True Use Of A Hashtag

Everyone is searching for the answer for how to use hashtags:

But honestly there is a very simple answer:

Apart from this, people will continue to use hashtags for emphasis in lieu of other formatting options.

Also to tag #FML on Instagram selfies and Tumblr posts.

Previous
SaaS SEO Framework Overview
Next
Technical Audits for SaaS Companies
How to Identify Your Target Audience in 2023: A 5-Step Guide
What Are Considered High-Quality Backlinks in 2023?
How To Close Organic Leads: A Quick Guide for SaaS Sales Teams
15 Step Checklist for SaaS SEO Growth in 2023
How to Build a Content Strategy For Your SaaS Company
Link Building Strategies For SaaS Companies
The Importance of Meaningful Content Writing in SEO
3 Misconceptions About Whitehat Link Building
Why You Should Be Concerned About Google's "Rich Snippets"
10 Ways to Find Fresh, High-Quality Research In Your Niche (For Free)
The 2 Secret Parts To Good SEO
5 Tools & Tactics To Master Social Media Marketing For Your Startup
How Important is Site Relevance When Building Backlinks?
AirBnB's Chicago Bulls Experience – Content Spotlight #001
5 Ways to Optimize Your Content
Coffee Brewing Guides by Blue Bottle Coffee – Content Spotlight #008
Crucial Techniques That a Good SEO Link Building Service Would Use
10 Questions To Ask When Hiring An SEO Expert
Google (Not Provided) SEO - 5 Tips
6 Top Content Marketing Tips to Attract More Traffic
How to Get Backlinks that Actually Drive Traffic to Your Site
What Is Marketing Automation? And Why Use It?
9 SaaS Marketing Metrics That Lead to Conversions
How To Make Any Product Sell Itself
How to Create Title Tags That Attract Your Target Niche
Evergreen Content: How To Write Content That Will Always Be Relevant
How to Create a Winning SEO Marketing Plan
How to Manage Your SaaS Content Production
Introduction: Sean Smith, Co-founder, COO & Project Manager
Who Wants A Powerful Inbound Marketing Plan For Free?
Square's Business Type Landing Pages – Content Spotlight #002
How To Grow An Internal Startup Marketing Team
Why Does Content Marketing Work?
Make Work Work For You
5 Blog Post Promotion Tactics To Increase Social Shares
How to Prioritize Your PR Strategy Efforts In Your SEO Campaign
Simple Guide To Google's Hummingbird Algorithm
What Metric Is Most Important for SEO?
5 Benefits of Content Marketing
The Pair-Up Link Building Strategy
3 Psychological Triggers That Create Influence
Usability Impact On Search Engine Rankings
How to Guest Post (And Mistakes to Avoid)
How to Choose a Good SEO Agency for Your Business or Website
Unsplash.com By Crew – Content Spotlight #003
10 SaaS Marketing Tools That Generate Leads and Sales
SEO Copywriting: You're Doing It Wrong
How to Measure Your Content Marketing Performance
How Much To Make An App by Crew – Content Spotlight #006
Why You're Not Ready For Good SEO
How Local Links Will Affect Your Search Rankings
Introduction: Michelle Carvo, Technical Production Manager
Holiday Marketing: 5 Steps to Success
SEO Rankings: Why You Should(n't) Ignore Rankings
The Secret Weapon To Beat Google's Not Provided
4 Myths (And One Truth) About Negative SEO from Link Building
7 Keys to Reduce Bounce Rate for Higher Engagement
eCommerce SEO - A Guide to Maximizing Your Site's Potential (ROI)
Introduction: Caitlin Schubert, Production Manager
ProductHunt Collections – Content Spotlight #005
3 Link Building Tips
Copywriting's Effect on Conversion Rate Optimization
How Google's New Hummingbird Algorithm Works
Tactical Link Building vs Authority Link Building: Why You Need Both
Introduction: Daniel Horowitz, Off-site Producer
The Benefits (And Drawbacks) of Working Remotely Full-Time
Shopify SEO - 6 Steps to Optimize Your Store
How To Promote Your Services on Large Publications
8 of the Best Content Marketing Tools
Why You Should Choose SimpleTiger As Your SEO & Inbound Agency
Native Advertising vs. Content Marketing: Differences and Best Practices
Introduction: Ashley Evers, Client Concierge
Groove's 0-100k in MRR Blog – Content Spotlight #004
The Difference Between Social Media & Blog Post Headlines
The Basics of Building a Better Subscriber List
Periscope Will Change Event Marketing Forever
Content Marketing Is About More Than Page Views
Introduction: Darac Moua, Client Coach
The 20 tools our business wouldn’t run without
Is Link Bait Right For Me?: A Definitive Analysis
4 of the Best Link Building Tools
Why Nofollow Links Matter in SEO
Introduction: Thomas Honeyman, Production Manager
6 Work From Home Tips & Tricks
How To Use “FOMO” To Launch Your Products Into Orbit
7 Advanced Writing Tips for Savvy Content Creators
Optimize Your Website Architecture to Boost Your SEO
What's in a Link? The Power of Link Juice
Strategic SEO Link Building Decisions You Need to Make
SEO Services for Small Businesses - What You Need and What You Don't
Exceptional content marketing is simpler than you think
Build a Winning SaaS Sales Funnel in Eight Steps
The Most Effective SEO Strategy for SaaS
Introduction: Matthew Wilson, SEO Technologist
Why You Should Think Like a Recipient When Performing Outreach
5 Content Marketing Best Practices for SaaS Companies
5 Of The Best Content Marketing Tools We Recommend
3 Small Changes to Optimize Your SaaS Marketing Strategy
Content Marketing Research Checklist for SEO
How Many Keywords for SEO Should You Track?
Subscribe for updates
Thank you! Your submission has been received!
Oops! Something went wrong while submitting the form.
Ready to get started?
Schedule a Discovery Call with us below and we'll see if there's a good fit!