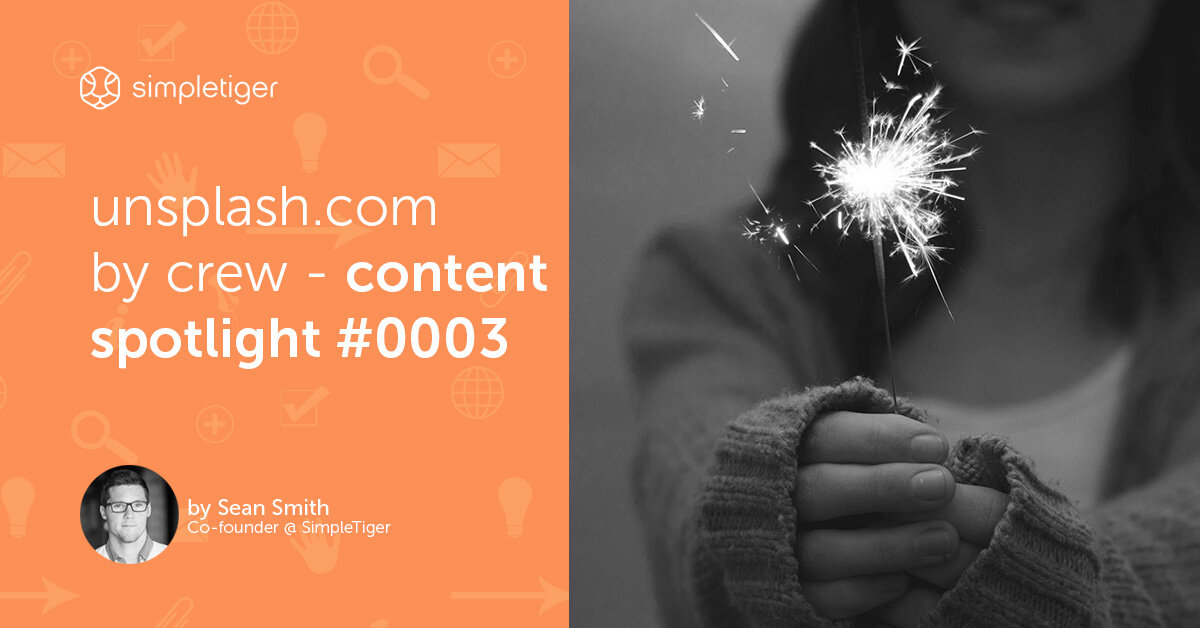 If you think the header image of this post seems familiar, it's because we use it on our homepage. It's also because we got it from Unsplash; a network of free stock photography from some of the best photographers in the world, submitted daily.

A screenshot of the Unsplash homepage.

I use Unsplash like crazy, because it scratched my shitty-stock-photography itch perfectly. Unsplash gave us stock photography that didn't suck, for no price at all. Why was it built then? Because the founders of Crew had this exact same itch to scratch, but had a larger purpose even still. They wanted to funnel great designers into their freelance designer/developer network called Crew, where they could pair them with projects that Crew would get a small kick-back from as they were assigned through their system.

Why was this special?

Not only did it accomplish its goals of getting designers and developers flowing through to their network, it went above and beyond. Unsplash became a staple for the stock photography industry, received an immense amount of media attention, millions of views, and millions of downloads later it's become one of the main sources of traffic to Crew's website, generating sales and signups galore.

The team at Crew were able to tackle one of the biggest hunches they had from the creative community in stock content with absolute utter simplicity. It was the simplicity and attention to detail of relating specifically to the persona of the creative designer that really made this stick. Not all of the photos would work for typical stock photography needs like office people smiling needlessly into a camera like fake pretentious idiots. The photos worked extremely well however for the needs of the creative and startup-focused community.

(By the way, these are the types of people who will link to your product, post it on ProductHunt, HackerNews, DesignerNews, and things of that nature, so it's best to take notice of those personas when creating new content)

By buying a $15 dollar Tumblr theme, setting up the domain, and getting a photographer to take a few snaps of coffee-shop workspaces, they had an MVP set to go. Then reaching out to multiple notable and underground photographers to submit their work, they had user-generated content rolling in, all they had to do is publish and give credit where credit is due. This is literally the most impactful piece of startup content per effort spent that I've seen due to its simplicity of content generation, and its output of signups, views, and media attention.

Within minutes of posting the brand new Tumblr site to HackerNews they had 10,000 visitors, then 10 minutes later 50,000 visitors, and on it went as the attention grew. Now the Unsplash domain has over 47,000 links from 7,000 different linking root domains (most of which sharing attribution of where they got the photo from, not required but requested gently by Unsplash) with over 20,000 social shares of just the homepage. It's not even the amount of links they have, it's the quality of the links that are coming in: Themeforest, Wordpress, MailChimp, TheNextWeb, Entrepreneur, Copyblogger, SmashingMagazine, HubSpot, FastCompany, and the list goes on.

Basically this 15 minute, $15 thought-to-product content marketing piece shattered the notion of successful viral content. Mikael Cho, Crew's founder even explains in this fantastic post how Unsplash basically saved Crew at a very hard, rough spot they were running into. I definitely recommend giving it a read.

For all these reasons we chose to feature Unsplash as our third daily content spotlight. I would love to hear in the comments how you guys are liking these content spotlights! Is there anything more you would like to see from them? Do you have any favorite pieces of content? Please push these responses into the comments, I want to hear them!